“I wanted to fly in an aircraft soaring high up in the sky… But now I am no less as I am behind designing and building and flying an aircraft”.

If you have that engineering instinct and the passion for flying, If you feel your adrenaline rushing at the site of buzzing aircrafts, if aerobatic stunts gets you out of the seat, the stage is set only for you.

This Skydive put your design and flying skills to the ultimate test.

Come and set the sky aflame this Pragyan.

Design and build a light wireless remote controlled aircraft (using motors only) including pitch and roll (yaw is optional) and which can complete a specified path, perform manoeuvres and successfully land in the specified zone.

The event comprises of 2 STAGES viz. 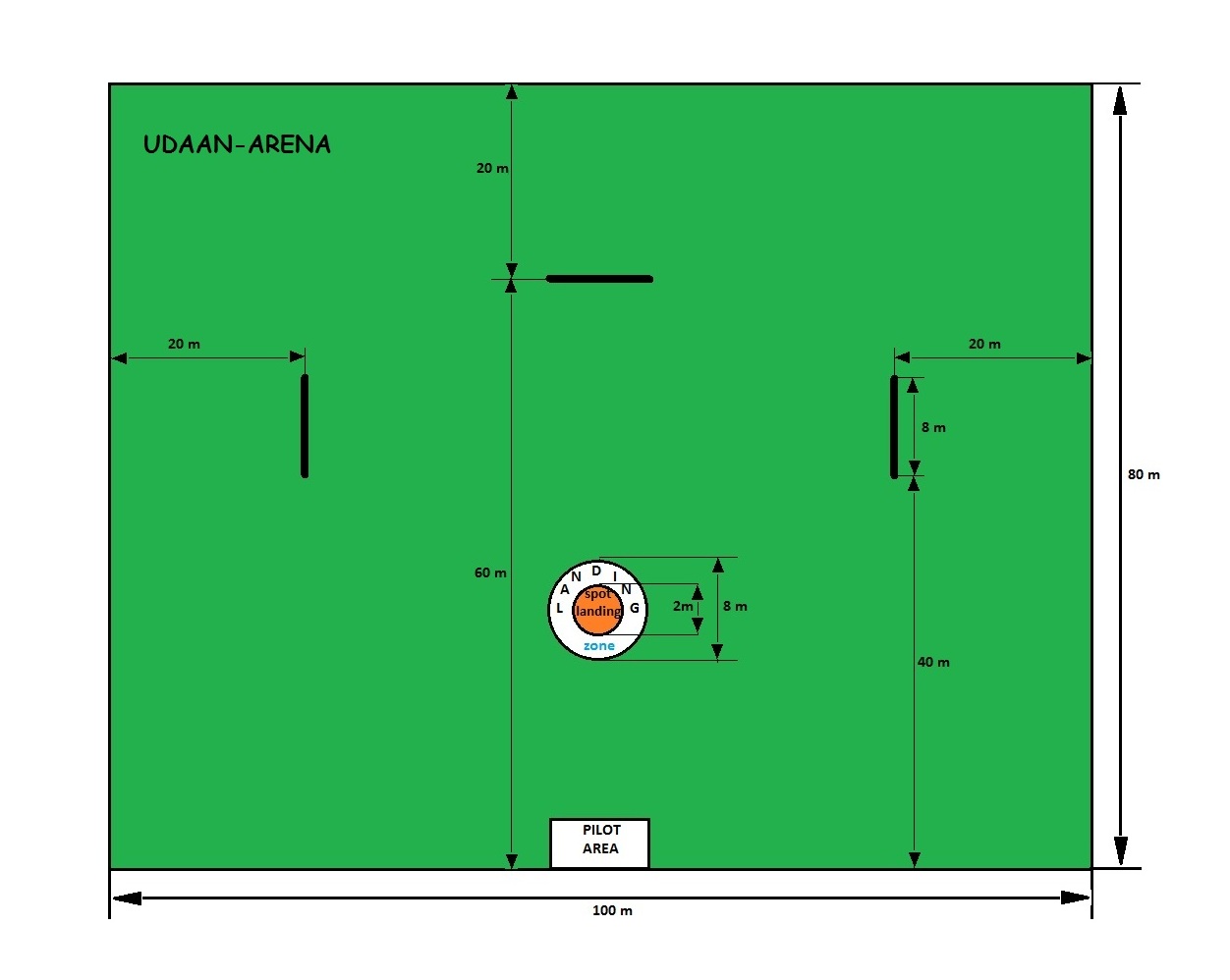 This Stage of the event is further divided into 3 ROUNDS

This is the simplest round of the event designed to test the aerodynamics of the aircraft.

This round is designed to test the skills of the flyer along with the stability & contrul of the aircraft.

Points will be deducted for exceeding the time limit.

In this round the plane has to complete the given circuit. 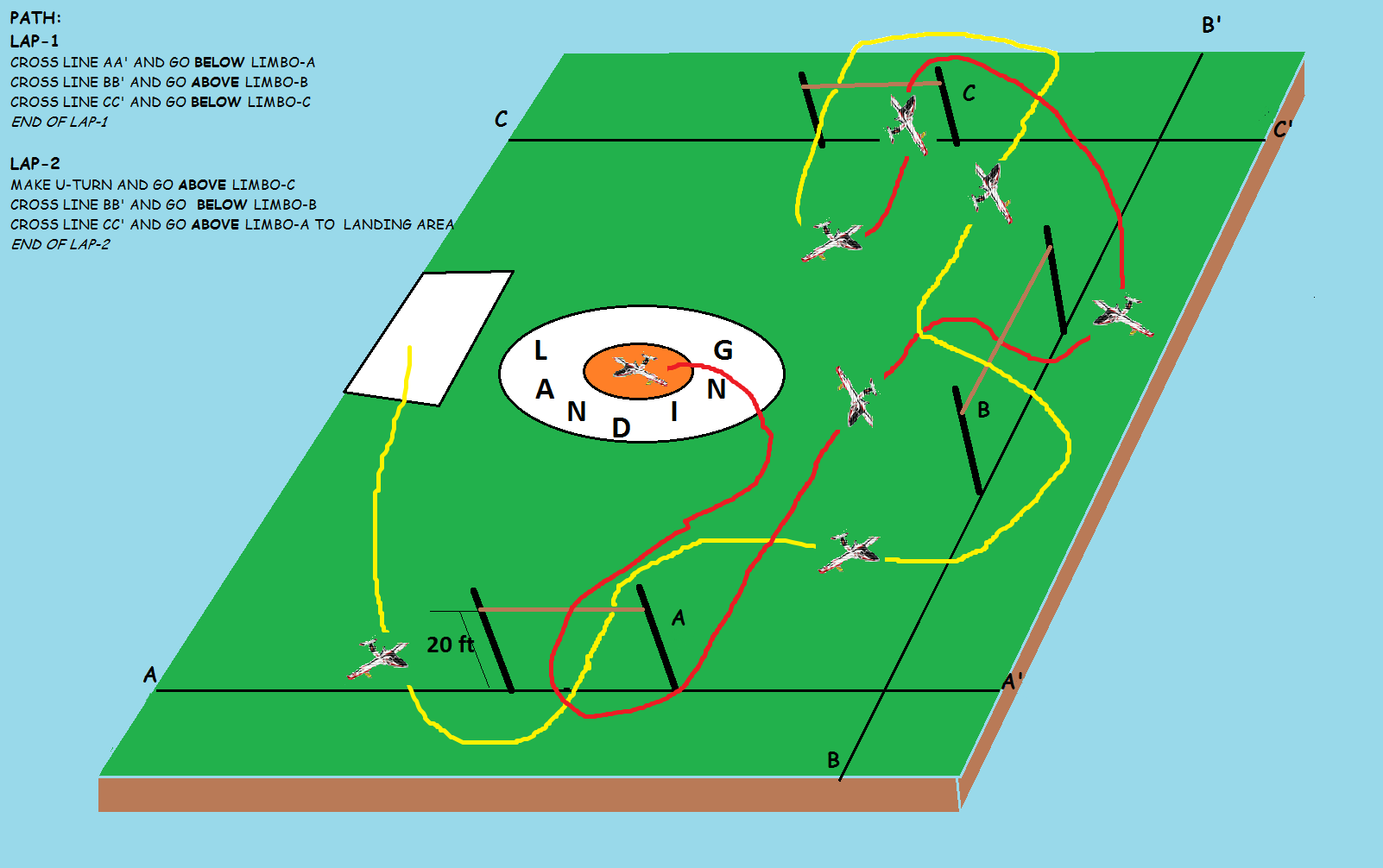 Irrespective of the performance in the above tasks, there will be a separate cash award for the best innovative design. The models will be  examined by aero modelling experts to decide this prize.

The teams will be shortlisted for next round (Free Manoeuvring) on the basis of the points awarded to them.

Total points awarded to a team in this round will be decided as given below:

The teams will be shortlisted for final round (Udaan) based on the points awarded to them in round-1 and round-2.


The points are awarded according to the formula given below:

Team with maximum points in this round will be declared the winner!

In case if there is tie between two teams combined scores of all rounds will be considered to declare a winner.

The maximum number of members in a team is 4(including the flyer). Students from different culleges/universities are allowed to form a team.

THE DECISION OF THE JUDGES WILL BE FINAL AND BINDING. NO CORRESPONDENCES WILL BE ENTERTAINED IN THIS REGARD.

In case you are a beginner, then we strongly suggest that you spend a lot of time in a RC FLIGHT SIMULATOR in a PC/Laptop before actually flying your model. It will help you save a lot of time and money. Some of the common RC flight simulators are listed below:

FMS is a real bargain. The software is available for free! You can download the latest version here

Aerofly Pro has very realistic flight physics and decent graphics. There's a dedicated cable to connect your own Tx to your computer. This allows you to get used to flying with your own transmitter. There is also a version that comes with a controller, but we would recommend getting comfortable with the Tx that you will use at the field.

You must be logged in to fill this form. Click here to login.
We'd like to hear from you
Accommodation
Schedule V12.26 Pdf Xls
News
ByteCode
An algorithm intensive Online Programming Contest
Dalal Street
A virtual stock market trading game
Jagriti
A rostrum for young minds to whizz away and come up with avant-garde solutions for the problems around us...
Robovigyan
With brand new mind-numbing electronic challenges to conquer, Robovigyan introduces some hip new stuff.
Infotainment
An elegant brew of information dressed with excitement and entertainment.
Codename 47
Codename 47 brings a mysterious and cunning environment to the robotic world.
Exhibitions
The eye candy of Pragyan. Visionary and magical, exhibitions offer a sneak peak at the future.
Lanka Reloaded
build the bridge that rescues Sita, bot-style!...
Workshops
Work up the ol'grey cells and indulge in the magic of making. Satiate the thirst to learn, explore and innovate.
Dinner Dash
Something comical in Robotics. Build a bot that serves customers dinner!
Guest Lectures
History has proved time and again that genius inspires genius. Come see those who dared to explore the beyond.
Anveshanam
Showcase your talent and enlighten the world with what you are aware of by presenting a paper... Deadline: 23rd January!
Pragyan Social Responsibility
Aiming to be servants; PSR, is our own initiative for social reform and enrichment.
Topographya
A fun filled treasure hunt event based on the use of surveying instruments.
Beer Factory
a role-playing simulation of the beer manufacturing industry.
BGreen
An event to design a green building that is energy efficient and self-sufficient.
Videos
Pragyan 2012 Teaser
Pragyan 2012 What's New
Making of the Pragyan Wheel
Downloads
Infotainment Brochure
Guest Lecture Brochure
Archives
Pragyan 11
Pragyan 10
Pragyan 09
Pragyan 08